The Aquation Submersible Respirometer system was deployed at 14 m under the sea-ice at O’Brien Bay, East Antarctica (near Casey Station, Windmill Islands).  The substrate at this location comprises many small rocks and boulders interspersed with irregular shallow patches of soft sediment, typically one to three meters across. previous studies have identified diatoms as the dominant taxa on the sediment, and they can be seen as a red-brown surface layer.  The Respirometer chambers were placed on the sediment which was approximately 5 cm thick.  The Shutter Fluorometer was positioned over the diatom mat and carefully lowered down, with care taken to minimise disturbance and avoid the Shutter Sensor sinking into the mud.

PAR sensors were also deployed at two different depths, and stir and flush pumps installed to continually stir the seawater in the chambers as well as flush out the stale water every six hours.  We aim to measure the rates of oxygen uptake, and possibly oxygen production, and from this data and core samples determine the rates of productivity of this benthic assemblage. 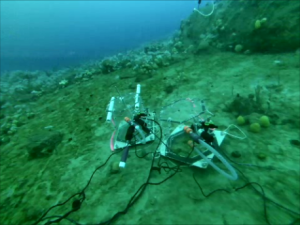 Aquation Respirometer System is deployed at 14 m depth under the sea ice.